It's time to care again about gold and silver

It's been a while since I've covered the precious metals in an article. They've been range-bound for much of the past year, with few notable sector developments to report.

But I feel compelled to write about them today for two reasons:

With technical and fundamental indicators flashing green simultaneously like this, now is an advantageous time to consider increasing your PM exposure (I did so myself yesterday).

Before I go into further detail on the current conditions of the PM market, here's a recent personal experience that underscores how few people have any real familiarity with gold & silver as an asset class, let alone own any (beyond, perhaps, a bit of jewelry).

A good friend moved and needed help transporting some bullion from his old town to his new one. Most of it was silver, several thousand ounces worth.

That much silver is pretty friggin' heavy.

So we huffed and strained, hauling that load out of one bank vault, into his car, and from there into the vault at his new bank. While we did our best to be as discrete as possible, our sweaty, grunting 2-man production was hard for the bank staff to ignore.

Managers at both banks figured out what was going on, as it was pretty obvious. And both separately asked us out of genuine curiosity, "Is that real silver?".

My friend briefly handed over a 100-oz bar so they could see for themselves, sparking conversations about the merits of owning physical bullion.

It turns out that neither manager had ever held a bar of silver before. This was pretty shocking to me. Even though they know that the safe deposit boxes in their own vaults very likely store some bullion, neither own it personally, nor even come into contact with it. It's just not a part of their world.

Anyways, later on I mentioned this story to another buddy who shared my surprise. "Man, if the bankers aren't familiar with silver and gold, then who the heck is?", he asked. A very good question, I agreed.

This is an otherwise intelligent, math-competent person. But like most folks, as well as those bank managers, he doesn't own any precious metals and so his knowledge of them is pretty limited. Limited enough to underestimate the price of silver by over 90%.

This reminded me of Mark Dice's videos, which show just how woefully ignorant the average person is when it comes to the value of bullion. In this one, street passersby decline a free gold coin in favor of a Snicker's bar:

Simply put: gold and silver, in the West at least, are underappreciated assets. As Grant Williams famously put it in his excellent synopsis, when it comes to public and institutional sentiment of the precious metals, "Nobody cares."

Which is a big factor why the prices of PMs have languished for the past seven years. And why the flow of bullion has been uni-directional from West to East over that period.

But there are gathering signs that it's now time to start caring again.

Looking at the just techinical side for a moment, both gold and silver have been in a prolonged downtrend for the past two months. They're now at extreme undersold levels.

Both RSI and MACD indicators are signalling that the recent declines have likely been played out at this point: 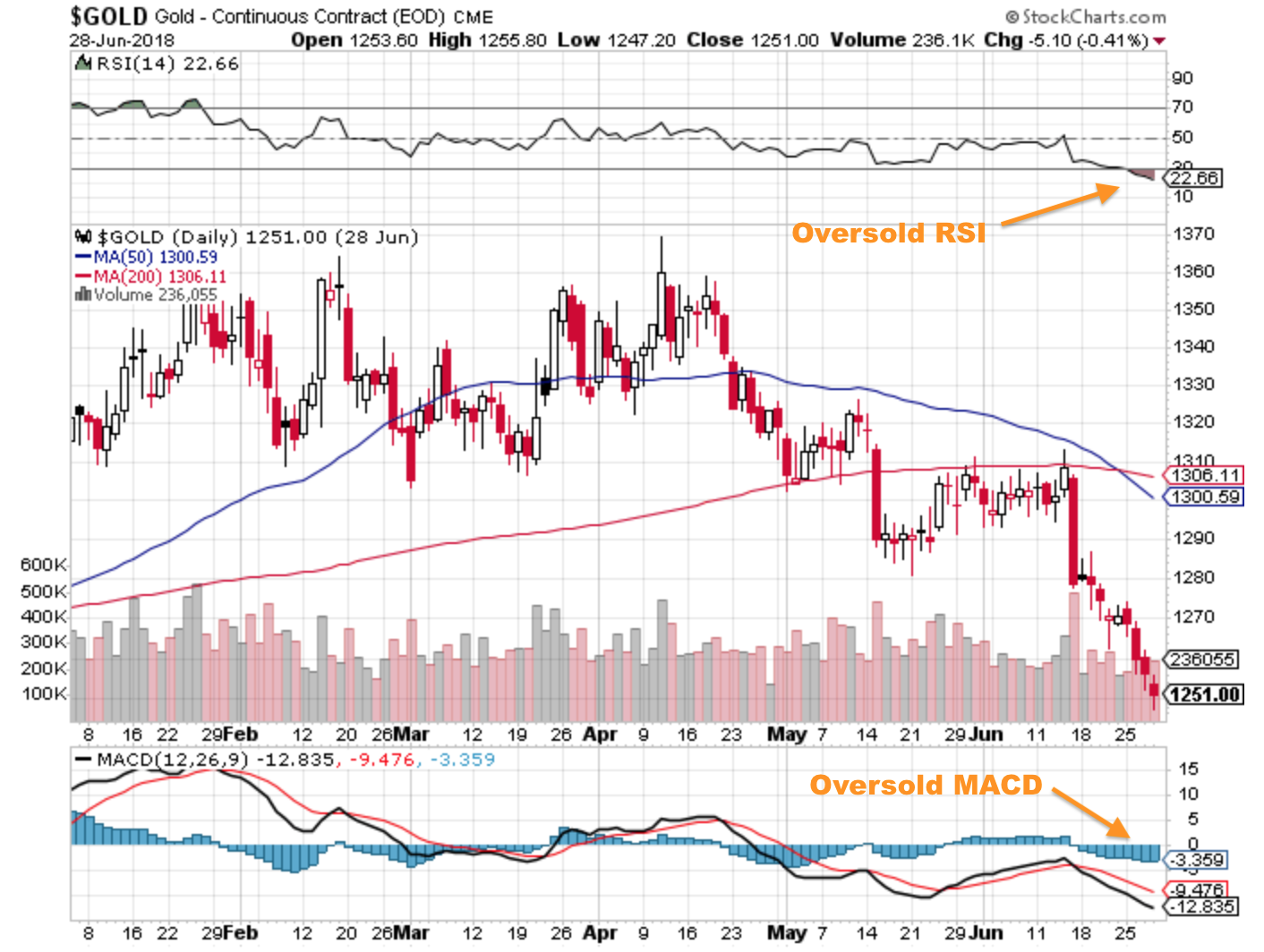 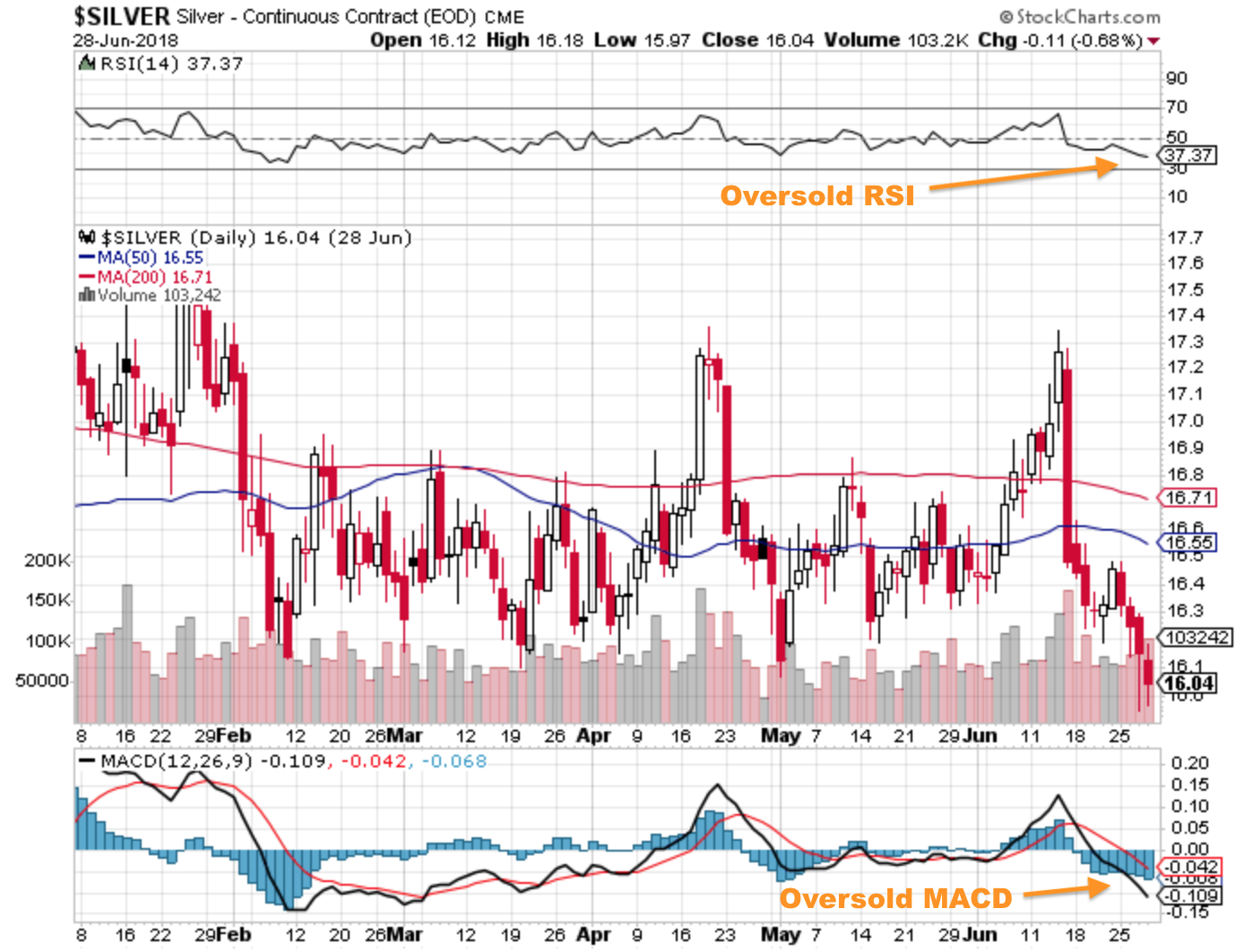 And both metals have now broken below their Bollinger bands (a sign of extreme oversold conditions). Here's gold:

While a break below the Bollinger bands could indicate that something fundamental has suddenly changed in the PM market to merit a materially lower repricing, there just don't appear to be any credible candidates for that argument. Yes, the dollar has risen over this period; but there are solid reasons that the USD and gold/silver need not always trade inversely to one another. And as we'll get to in a moment, conditions are actually becoming more PM-favorable.

Technically-speaking, it seems much more likely that the current downtrend is long-in-the-tooth and that, as prices dip down to 18-month lows, a recovery is soon due. In fact, we may be seeing the start of such today, the first material up day for the PMs in a while.

Fundamentally-speaking, world events are providing more and more reasons to own gold and silver -- from stratospheric asset bubbles threatening to burst, to a long-overdue return of market volatility, accelerating de-dollarization, slowing global economic growth, increasing credit market risk in both Asia and Europe -- the list goes on and on.

The full set of PM-positive drivers are covered in our recent excellent interview with Ronald Stoerferle summarizing the insights of his exhaustive 230-page annual report titled In Gold We Trust. If you haven't listened to it yet, carve out 49-minutes to do so soon:

To the many reasons Stoerfele gives in support of his conclusion that gold is "dirt cheap" right now, we can add the multiplying macro data points predicting market turmoil and economic recession later this year, as well as the building uncertainty of further rate hikes by the Federal Reserve -- all potential developments that should lead to higher PM prices.

Whether you're amassing bullion for the long term (which we've long recommended) or speculating in the paper markets for the short term (something we don't encourage for the average investor), you want to buy low and sell high. With precious metals trading near 18-month lows and close to the "all-in" production cost for many miners, prices are unlikely to get much lower than this.

So while prices remain at current lows, we recommend considering the following:

Remember, right now, nobody still cares about the precious metals. Which is why it's estimated that only 1-3% of US households own any (jewelry aside).

So even if you only hold a few ounces, that's still more than 97-99% of everyone else -- which may make a tremendous difference to your prospects when the world starts caring again.

Chloe Cole says she began to be "brainwashed" by the gender ideology she saw all over social media when she was only 11 years old. By the time she turned 13, Chloe was convinced that she was a boy, and her parents didn't know how to respond. So they turned to the so-called "experts," who rushed Chloe into life-altering hormone treatments and surgeries. Not only did these experts give "no alternatives" to transitioning, but they lied to Chloe's parents behind her back to scare them into compliance.

Chloe joined "The Glenn Beck Podcast" to share her heartbreaking experience and to expose the dark world of “gender-affirming care,” which she believes no teen should ever be subject to — from hormone blockers to mastectomies: "This is all wrong. I regret every single step, and this shouldn't have happened."

She also had a warning for parents about what led her to make those decisions in the first place, and she provided some key advice on how to react compassionately to situations like hers.

Watch the full podcast with Chloe Cole below:

This technology has the potential to be incredible and miraculous, especially for those with brain injuries, Glenn Beck said on the radio program. But the downsides of technological developments like this one can be terrifying, too. Could this mean that "the singularity" is on our doorstep? On top of that, a quantum computer has just simulated a wormhole for the first time. Maybe it's time we actually have these conversations.

Watch the video clip below to hear Glenn discuss how the technologies that we have on our horizon will change everything. Can't watch? Download the podcast here.

TIMELINE: There's a REASON why no one is asking about the Jan. 6 pipe bombs anymore

Nearly two years after the January 6 riot at the Capitol, the mystery of who planted two pipe bombs outside the Republican and Democratic National Committee offices remains unsolved. Thankfully, the bombs were found and disabled before they could cause any harm, but with their potential for devastating consequences — not to mention the massive investigations into all things relating to Jan.6 — why does it seem like this story has practically fallen off the face of the earth?

No one in the corporate media has even tried to look into it, and the government's narrative that the bombs were meant to be a diversion for the Capitol riot doesn't make sense when you look at the timeline of events.

So, on this week's episode of "Glenn TV," Glenn Beck broke down the timeline of events that led up to the discovery of the bombs and how the facts appear to point toward one sinister conclusion:

"It doesn't really hit you unless you look at it as a timeline, and then you're like, 'wait a minute that doesn't seem right.' The unsolved mystery of the pipe bomb has been used by the government to show that January 6 riot was part of a larger coordinated attack ... that the bombs were a diversion to get the Capitol police away from the Capitol," Glenn explained.

"But the bomb had a one-hour timer and it was planted at 8 p.m. the night before. So the bomb would have to go off the night before at about 9 p.m. on January 5. How's that a diversion? It's not physically even possible."

The Biden administration has weaponized the federal government against the American people. But officials have hidden most of their attacks behind a secretive and cavernous bureaucracy.

There are so many unsolved mysteries that Joe Biden and the Democrats not only refuse to answer, but in some cases appear as though they are ACTIVELY trying to cover up. Like what happened on January 6? Who is Ray Epps? Who planted the pipe bombs? What’s in Biden’s executive order on elections? What happened to the SCOTUS Dobbs leaker? What’s the COVID origin story? What’s happening with crypto, FTX, and the Central Bank Digital Currency?

These are just a few of the unsolved mysteries that we need to DEMAND answers on. On his Wednesday night special, Glenn Beck outlines a chalkboard that will leave you convinced the DOJ and FBI are LYING to the American people. The more secrets the Deep State holds, the more its power over us grows.

Watch the full episode of "Glenn TV" below: